Pursuing Her Dreams: A Young Mom Continues Her Education in Ecuador

Getting a quality education can be a challenge for many young people in the developing world. For 18-year-old Katya from Riobamba, Ecuador, becoming a mother made that challenge all the more daunting. Newly married and with a baby on the way, Katya and her husband moved to the city of Sangolqui in search of work. In Ecuador, and in many developing countries, it’s all too common for young people like Katya and her husband to leave school early in order to find whatever work they can, foregoing the long-term benefits of completing their studies.

With the urgent needs of supporting her family and taking care of her five-month-old son, Katya wasn’t sure how she would be able to continue her education and pursue her dream of becoming a nurse. Then she and her husband found Cross International partner New World Christian School. Thanks to the school’s unique schedule, Katya is able to care for her baby during the day and attend classes at night. Katya’s husband is also a student at New World Christian School and is able to continue his education while working to support their family.

New World Christian School was founded specifically to ensure that students like Katya and her husband don’t have to drop out of school just to make ends meet. In addition to strong academics, the school also focuses on the Gospel and Biblical studies. And, with support from Cross International, New World Christian School holds weekly church services and offers Christian counsel for their students.

Thanks to Cross International and New World Christian School, Katya will soon finish her degree and she looks forward becoming a nurse one day. Without the kindness and compassion of generous Cross supporters like you, the future would not be nearly so bright for Katya and her young family. Thank you for making it possible for them to receive a quality, Christian education in Ecuador.

Born with Down Syndrome in Haiti

The youngest of five children, 14-year-old Meh was born with Down syndrome in Haiti. Despite her condition, Meh began school at the age of five. Sadly, though, she struggled to find the special needs support to help her succeed. Her parents tried sending her to three different schools, but each time Meh’s special needs were not cared for. At one school, a particularly mean teacher would beat poor Meh, leaving her with bruises on her arms and legs.

Violent protests and civil unrest further complicated Meh’s education and her parents didn’t know where to turn next. Then they discovered the National Academy of Excellence (NAE), a Cross International partner in their area. Officially opening in 2016, NAE is a school that provides primary education for children living on campus as well as kids, like Meh, who live nearby. Thankfully for Meh, NAE even provides for children with special needs in Haiti, ensuring that they too get the opportunity to learn in a positive and healthy environment.

For Meh and her family, the National Academy of Excellence has been an answer to prayer. Meh has finally found the place where she feels like she belongs. Since she began attending NAE, Meh has shown remarkable improvement in her fine motor skills, spelling, and vocabulary. At the NAE’s annual Christmas show, Meh even performed a song during the school play!

In the short time she’s been at NAE, Meh has made remarkable progress and she says how much she loves going to school and how proud she is to be an NAE student!

Programs like NAE are so important for special needs children in Haiti, like Meh, who have nowhere else to turn. Thank you for helping this precious young lady, and so many other children, get the priceless gifts of loving care and a quality education.

Josefina was stuck. With four children to care for, Josefina and her husband, Santos, were struggling to find enough work to put food on the table. The pair mainly worked as day laborers in their hometown of El Milagro, Guatemala. Working for others, it was difficult for Josefina and Santos to get ahead. They wondered if they would ever break free of the cycle of poverty.

Little did they know God was about to bless them with a new opportunity.

Josefina was chosen by local Cross International partner, Hope of Life, to receive help starting a new business raising chickens for eggs. Thanks to the kindness and generosity of Cross International donors like you, Josefina and her family received training on how to care for and maintain a flock as well as 40 hens and a coop of their own. Because Josefina is not literate, field staff enlisted the help of her eldest daughter to help with keeping track of egg production and sales.

In the first year of the business, Josefina and her family worked diligently to make the most out of their new opportunity. Not only did they start earning a daily income, they were able to reinvest some of the profits in replenishing and expanding their flock. For Christmas, Josefina was able to purchase and raise a small flock of broiler chickens, and they all sold out!

Josefina and her family feel blessed by God to be a part of this Cross International poultry project and they are very proud to have their own business and to be able to support their children.

Thank you for making family agriculture projects like this one possible. You are giving hard-working people like Josefina the dignity and hope that comes from being able to reap the fruits of their labors and build a future for themselves and their kids.

If you want to support other families like Josefina’s, you can donate to the animal and agricultural fund or provide economic empowerment for small businesses in other communities in need.

A Young Wife and Mother Becomes a War Refugee

Like so many other Ukrainians, 34-year-old Natalia has been through a lot since the Russian invasion of her country in late February. “We were asleep when we received a call at 5am from friends telling us that the Russian army is invading,” she remembers. “For six days we followed the same route over and over. When we heard the air raid sirens outside, we went to the basement of our apartment building.”

When the bombs started hitting closer to home, Natalia knew it was time to take her 9-year-old son, Constantin, and go. “When the Russian army bombed the military base nearby, we decided to leave Ukraine,” she said.

So Natalia and Constantin, along with Natalia’s mother, Tatiana, set out to find safety, leaving their home and everything behind, including Natalia’s husband. “We traveled with two friends of mine and their children,” Natalia related. “Our husbands stayed behind to defend the country. It was very difficult to say goodbye.”

When the family arrived in neighboring Moldova, they received a warm welcome and essential help, thanks to support from Cross International’s local partner. Natalia has no idea if or when she’ll be able to return home, or when she’ll see her husband again. But in the meantime, she’s found comfort while living as a war refugee. “We had thought and hoped to be home after a week, but it looks like it will take much longer,” Natalia said. “The future is very uncertain, but we are grateful for the way we have been taken care of.”

Thank you for helping care for Ukrainian refugees like Natalia and her family. Please continue to pray for peace and to send help any way you can.

Argelia never had the chance to go to school in Guatemala. Now 52 years old, she still cannot read or write. Even so, Argelia worked hard to provide for her children as best as she could, but with little opportunity the cards were stacked against her. Then, thanks to the faithfulness of Cross supporters, Argelia got connected with Hope of Life, Cross International’s partner in Guatemala. With the support of CI donors like you, Hope of Life is in the midst of a three-year community transformation project in Argelia’s village of El Milagro.

One of the core components of this community transformation project is to help individuals build thriving agriculture businesses in order to provide for their families and increase the availability of nutritious food in the village. 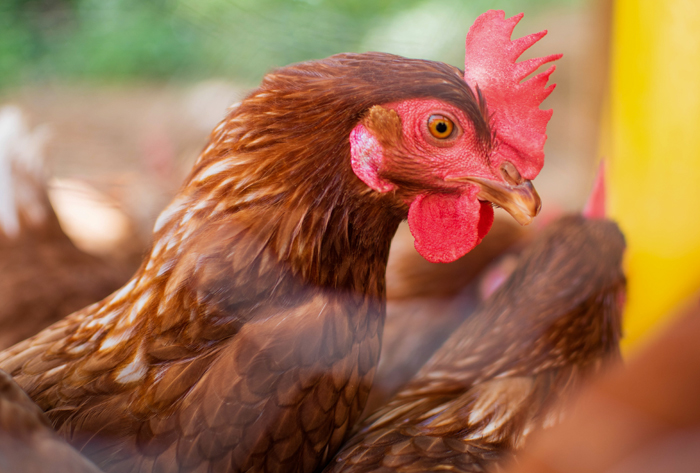 Because of her hard work, Argelia was chosen to receive help starting a chicken raising business. Argelia has been diligent in attending training sessions and now she has her own chicken coop and is able to harvest eggs for her family to eat and to sell at the market for extra income. Argelia is incredibly thankful to have been able to be a part of this Cross International poultry project in Guatemala. “No one receives if God does not give,” Argelia said. “God is great and powerful and I am so grateful for the benefit of these projects.”

Thank you for blessing hard-working people like Argelia with the means to build a better life for themselves and their children!

If you want to support other families like Argelia’s, you can donate to the animal and agricultural fund or provide economic empowerment for small businesses in other communities in need.

The United Nations Food and Agriculture Organization estimates that 811 million in the world suffer from under-nourishment. By providing the gift of food, you will save the lives of thousands of hungry children and their families in developing countries like Haiti, Malawi, Guatemala and Nicaragua.

Your gift will support the provision of meals and other basic services that are essential for survival. A generous donation during this season of giving will change lives forever.